After the stepping up of shelter in place rules and the closure of San Juan county to back country skiers and parking on their side of 550,  I scrambled to find a legal area to park and tour. Black Bear pass wouldn’t cut it as it fell in San Juan County.   I’m not sure how a county can close federal land, but I digress.  An internal question only for introspective answers. I surely didn’t want to be towed by an angry Silverton sheriff or my windows broken out in a fit of Hawaiian style “locals only” rage by some San Juan resident with my Montana plates as a catalyst.

On Monday, five days after an 40 to 60 cm snow cycle, I drove up to a freshly plowed parking area just below the Red Mountain Lodge sign.  One orange tagged beater white Subaru was the lone other vehicle. I put a hastily worded note on my windshield to explain my parking. Really just to make me feel better about leaving my vehicle.

Looking back I saw the plow operator working 550 just up the road from my van. I looked hard for a minute and headed back. He stopped his plow as I waved him down.

“Hey, how is it going, can I park there?” Pointing a pole at the black beast.

“Which one are you?”

“Not the white Subaru.”

“Ok. Not a problem, there’s more parking up the road if you want.”

I had asked everyone I possibly could.  I was solo touring on a Monday in hundreds of square miles of empty mountains, so social distancing  was a foregone conclusion.

My goal was the summit and descent of Red Mountain #3.  Lying directly above the lodge.  At around 13,000 feet it’s a peak with large skiable West and North faces.

Tracing the skin track past the lodge, a lightly used track wound up the north side of the main avalanche path into scattered pine trees that lined the ridge.  A friendly hello from a young lady lodge worker was returned and I was on my way.

Looking at the Ridges Bracketing the West Side Of Red #3

The tour was awesome. There were some tightly spaced 5 meter turns midway up the face, but nothing above.   I booted from the top of the tree cluster on scree to the summit. 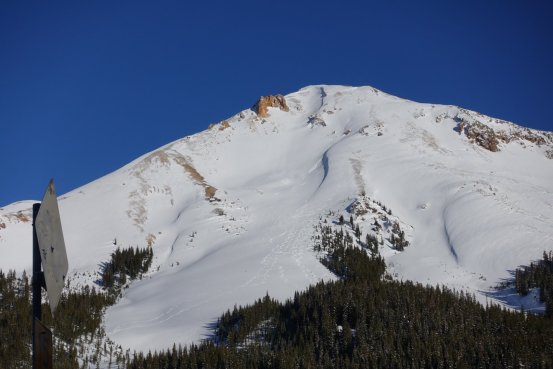 The descent was really good. I started just right of the summit an worked into the run. 20 cms of light density pow were slightly wind drifted on top, but unconsolidated.  Big turns tracing the edge of the wind wave were super soft and consistent. My tracks set a small panel off below the wave, a shallow, small new snow slab that did not propagate. I  followed my up tracks to back the car, enjoying the awesome conditions.

It was so good I returned Thursday to try it again. What a difference. A wind event on Wednesday completely changed things. Winds were still up from the South/ Southwest, but I was up for it, So I thought.

Made my way to the North ridge by the big rock prow and tried to climb on the ridge. I underestimated the wind speed in the alpine.

I was almost blown off the ridge and had to retreat and contour around the prow.  The day was clear and nice, but the alpine winds were around 60 mph from the S/SW and brutal. My least favorite weather to deal, high sustained winds sap energy and make it hard to get in a rhythm hiking.  From Mondays beautiful hike to this Himalayan death slog, I was absolutely worked at the top. I skied directly from the summit into the hourglass shot. Skiing was concrete wind board but good smooth skiing on the north facing panels with wind aided face shots. Lower face was a mix of sastrugi and scour. Trundled small scree particles peppering the run and anti-tracks were indicators of just how severe winds were on Wednesday night.

I walked on a deserted 550 back to the car down the middle of the road. Eerie feeling. 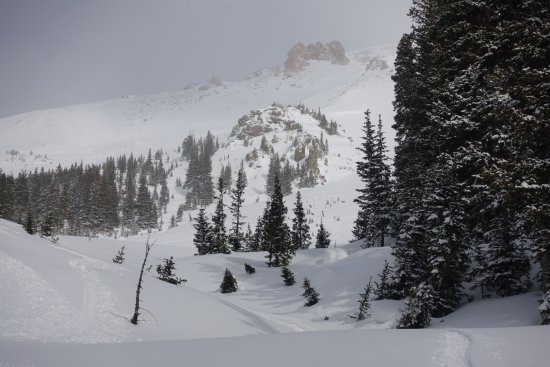 Saturday was the trifecta.   A small semi reset of 5 cms of light snow and light winds did not ramp the avalanche danger up but provided much needed snow.  It was the middle of the three runs in terms of conditions. Not quite enough to fully reset the lower areas, but provided good turns up high.  After being humbled by the North ridge, I went back  to the South side ridge and descent.

Saturdays Run from the Top

There were more cars than I had seen all week combined. I steered clear of the couple other groups I saw, and parked as far as I could away from everyone.   Toured around in the lower woods until dusk to stay away from all weekend warriors. 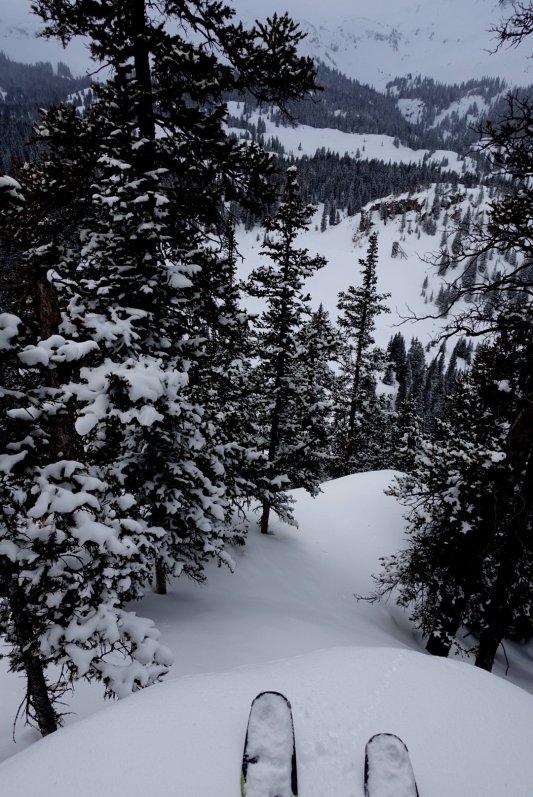 Time to give Red #3 a rest and try something new  Won’t be skiing anymore Saturdays.

Disclaimer: I’m recreating in the county I live in. Not expecting S and R to come get me and will not call them.