It’s been good to see new people checking out the site. We are always looking for content, so if you have trip reports or pics you’d like to see on here, please let us know, shoot us an email, or post up on the Facebook page. If we like your style, we might even get you on board as a contributor.

Now onto the goings-on from Monday and Tuesday:

Our third run to King A’s (now to be referred to as Horton’s Line in honor of the man himself), was an eye opener. Wall to wall rip in the upper panel of Horton’s, about 18 inches deep and two hundred feet wide, apparently skier triggered by someone traversing over to Gwenivere’s, ran all the way through the lower choke and into the flats above the last water fall. The soft slab debris was piled high in the gully, and luckily the ski tracks of the group before us showed everyone to be on top of the debris. Did a couple cursory beacon checks through the run, happily with no hits.

It is truly amazing the power of moving snow, and when EV sheds, it’s time to be cautious and take a mental note of the areas sliding.

Tuesday was much better stability as much of what could rip in EV Monday did. The new snow came with colder temps Monday night, and the six to eight of new fluff seemed much more stable, especially on the debris that slid yesterday. Able to get out to Old Man’s first and fresh. Always amazing to look through the notch and see a blank canvass in Old Man’s with good visibility. Gets the heart going, and you definitely want to stick the cornice entry in front of your friends.

DPS Dave, Big John, and I all managed to hit it. I went first, cut it to the right and skied the sparse trees. Able to watch those two tee up the middle. With nothing running from my cut, they took it. Awesome run. We staged before the lower bonus aspens for a safety meeting. Pulled out the probe and found a 95cm storm total in the north facing, fairly low trees and skied blower trees to the traverse out. Our bus ride was packed, and we knew getting out early was the call. Rather than deal with the second lap madness, we got off at Columbine and headed for the Gore once again…

…Oh the Gore, land of endless lines and lessons. Had the two o sevens for the skin, and quickly fell behind DPS and John as DPS Dave flew up the day old skin track and I tried to keep him in sight slogging the Caddies uphill. Had skin issues, culminating in a double skin fail face plant that had me covered head to toe in fluff. Tragically funny. As I was muttering hateful things at my skins and clearing my boot for another go, a voice behind me piped up. “You know, you really shouldn’t kick those AFD’s”

Behind me was flannel boss, not from our group, skinnys in tow flying up the trail, watching me flail like a wounded moose. Now being in Bighorn, having a skin moment in really no the time or place where I want advice raining down from the trees. “I work in a shop” he says. I just wanted a solo moment in the woods, covered in melting snow, hands filled with soggy, useless skins. I wandered to this side of the highway to get away from such third person interaction except for my friends. I told flannel boss to go ahead and that I as well work at a shop, but wasn’t really in need of Duke advice at the present time. Lesson learned, take care of you skins on a multiple skin day, even if you’re all jacked up about firsties in Old Mans.

Next lesson learned. If you come upon a large disgruntled man in the woods, don’t disturb him or offer upbeat advice. Stay calm and move along.

Caught up with my crew at the flats and offered apologies to my partners. Nothing more frustrating than failing skins. We followed Dave into the steep trees and were rewarded with deep shots all the way to the tree gully opening, about 750 feet below our entrance. The gulley to our right, Dave lead the way through the trees, avoiding the gully and the new two feet sitting on top of the melt freeze crust from the previous week.

Dave shouted clear, and I delved in farther right, asking the Gore gods if I could, might I, test the open pockets. After three turns on the tree spine wall, the answer was an emphatic no. Big J yelled and I knew that the beast was at my heels. I hit the throttle, skiing towards Dave position. Coming over the last steep roll, I found myself, in mid turn, on the bed surface from Dave’s slide, railing toward a stand of baseball bat sized Aspens.

It was a strike, and I filtered through the stand, ending up sliding head first through an evergreen tree well, dodging my sluff as it rolled by. Lesson learned, if loaded lower tree faces have slid once, probably will again. Don’t get greedy like I did, stay in the trees. Lesson part two – Small radios are a good idea in complicated terrain. Information such as “hey, I slid out the entire lower face, so watch out coming over the last roll” is valuable and can’t be communicated via shouting over wind gusts.

Big J rolled through cautiously to round out the group. We made our way out, scoping smaller tree chutes along the was. Again the Gore was chock full o lessons, good snow and dicey moments. Another great two days off, more pow, more lessons and painful comedy. Video from across I-70 coming soon…

Windy days in the Gore and EV the last few days with the storms that have rolled through. Went into the Bighorn drainage last week Tuesday to battle the isothermic snowpack held together with a top four inch crust layer. The warm weather the previous week resulted in water percolating through the snowpack in lower elevations, creating large loose facets in all aspects at lower elevations. 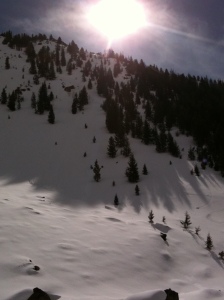 Big J and I went up the Bighorn ridge on a gale force day to explore more tree chutes, skinning up the south facing punchy melt freeze crust before dawn. The ridge lines were howling, the creaking of the lodgepole pines were a creepy reminder of the downfall potential in beetle kill forests in high winds. There were many recent downed soldiers, branches sticking out of the snow.

We skinned up to the farthest tree chute, our drop in really an educated guess in the thick trees. We dropped in and wove our way though the steep trees to the entrance of the gully and the increasing wind. Looking down the path, it look loaded. I decided to cut the left flank of the gully, over to a treed ridge. Passing John with a little pace, I expected a firm surface covered with the slabby six to eight inches. What I got was a sinking, submarining trip to the bottom of the snowpack about three feet down. I sunk backwards and ended up with one ski pinned underneath a rock I uncovered, falling backward onto the 40 degree slope. My efforts to release my binding were met with more sinking and twisting with no binding release. My knee was popping and slowly twisting out of place. 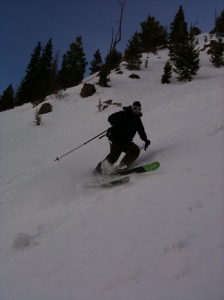 I was in a bad spot, and had no other option but to have John come down and help me out of my stubborn Duke. Not ideal, but a better option than skiing down with a dislocated knee, broken leg. The Gore had me whimpering, and showed me who boss. Thanks to Big J for saving my leg. I took a moment assessed the leg and continued on down skiers left flank of the gully. We quickly realized the gully was not an option. Every turn rolling into the side of the gully was met with instant slab release into it. The sixty mile an hour winds had done their job. We cautiously leap frogged down the ridge, skiing on alternating wind scour and boot deep slabby softness, watching it all peel at the slightest touch.

There were four slab peels that qualified as avalanches, the last one 500 feet above the deck was the largest, set off as I skied around a tree band. It propagated to a foot deep and a hundred feet wide. It started to suck me with it towards the last stand the trees. I was able to ski off it at a 45 degree angle, off to the side and watch it plow through the tree stand billowing and hitting trees with an audible whoomph sound. Impressive to say the least. 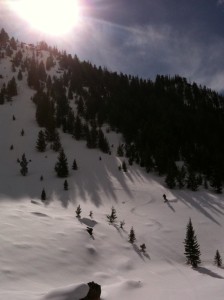 A humbling, sketchy, slightly painful run in the Gore. Wouldn’t have it any other way.