Took advantage of the perfect weather to do a midnight skin up meadow mountain under the full moon on Tuesday with Luke and Paulie and dog.  First group gathering gearing up for the AK world as it is now a countdown in days towards the end of the season. Surreal snow world cast in a  ghostly bone white light, the trees and skin trail glowed brightly under the moon. We worked our way upward through the meadows and aspens while snow machines rallied around us, transferring partygoers from the trailhead to the cabin for a full moon party.

After a couple of hours we arrived at the cabin, drawn into the cabin by firelight and laughter.   We arrived and were greeted warmly by the Mushroom people, speaking in tongues and smiling, They welcomed us to their fire with clicks and whistles and we obliged them. The light from Minturn and Vail were visible and the Gore range rose up in authority, bathed in blacklight.

The ski down was low angle and variable, pockets of stale powder, interrupted by frozen track chatter.  Dog decided that snow machines were more fun and took off on us. Luke got a second lap around midnight back to the top by snow machine and a bonus ski down with the wayward mutt.

Headed out to EV on Wednesday afternoon in rising westerly wind and lowering, thickening grey clouds.   Haven’t been back in some days, so again interested in what has transpired since last week.  Hit the poma and was warned by an older guy passing by on the catwalk about the danger in the West Vail Chutes.

Top of the world and  I saw tracks  beaten in the usual places.  Much of Benchmark is unrecognizable from last year and unskiable due to low snow, so the skier’s left side is hammered.  Right side of West Wall, Tweeners and Tele Line all had tracks.  No recent slide activity that I could see.

First time able to ski left past the initial cliff band and into the right center of Old Man’s. The upper scarp is still rock hard,  Supportive dense wind buffed pow skied o.k and the roll over areas through the two cliff/reef areas held fast.  About a dozen tracks littered the skier’s right side middle of the bowl, while the CDC area remains unskied.  The bottom of Old’s had covered mounds of old debris.

First time cutting over to the MVP area from Old Man’s, wanting to see how the Forgotten Trees were skiing.  Upper turns in the trees were more stale cake but fresh, as most of the other tracks headed straight.  Came upon the first cliff band and side-stepped off a three-foot ledge onto a briefly steep(40 degree) open tree pocket after the rocks.  Sunk to the ground and fractured a small area under the rocks that disintegrated  like sand. 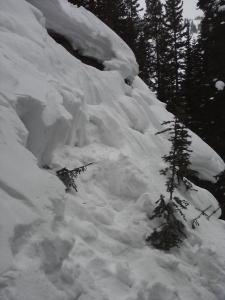 Took the opportunity of standing on terra firma and looking at a small but distinct fracture line to take a look at the snow. Not much change 2-3 m facets less than fist density, topped by slightly denser old and new storm snow.  Any column cut still can’t stand on its own and fractures Q3 within the facets.  No real surprise in stability.  Still around 110 cms. 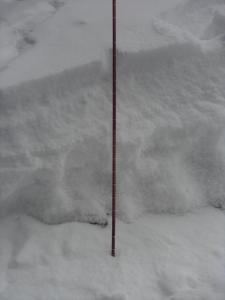 Ended up skiing 30 ft wide refilled bed surface pockets in the trees to get to the exit.  Traversed out onto thin and crusty east face and onto the track out to the bus. Thin fast and littered with stumps and bushes, it is not fun. Biggest March ever.