Five thirty in the morning and I’m headed in the darkness to the small town of Paia on Maui’s west side, across from the legendary windsurfing mecca of Ho’okipa beach. The Fuji road bike is assembled and ready for the ride that starts here, climbs up country through the ranch towns of Makowao and Kula  and into Haaleakela park.  I plug in the headphones and I’m off, go team! 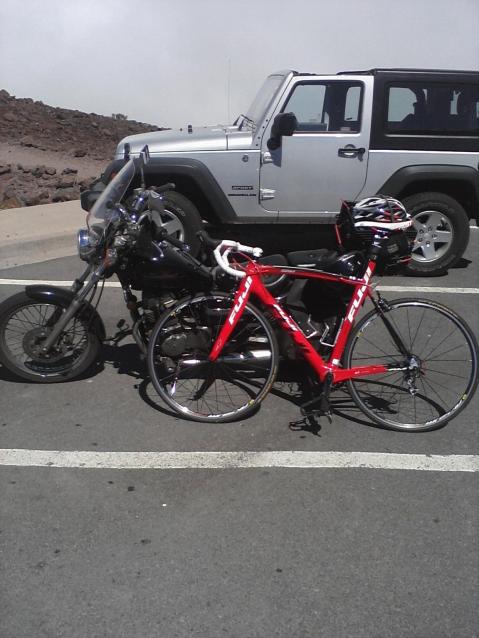 I feel good. I break throught the first twenty minutes and get into a rhythm, slowly leaving the ocean behind.  My support vehicle, Ryan on his Honda Rebel, has decided to tag along for the entire journey. The sun  comes up over the east side of the island and I catch a glimpse of the incedible sunrise. Up country Maui is a world unto itself, far from the beaches and tourists, it is a land of cattle, cowboys and sheep ranchers tucked underneath the shadow of the volcano I’m about to climb.  Glimpses of unparalleled beauty here, flowering vines entwined in barbed wire, sheepdogs chasing their flock through rolling grasslands, estates with flawless Japanese gardens roll past. 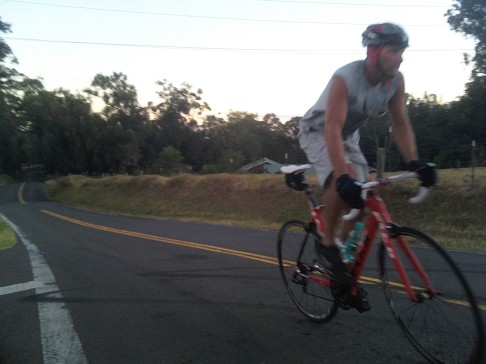 An hour has taken me through the two towns and I stand at the Haleaakela park sign, my first break.  The approach is done and now the true climb begins.  I try not to think about the twenty two miles left.  I still feel strong but the first fifteen miles has me sweating and legs feeling it.  Time for the mental games to begin, trying to take chunks out of the miles by aiming for smaller goals, the next sign, the next switch back.  Fueling and drinking as much as i can, I begin the endless parade of switchbacks up the flanks of the volcano.  There are markers on the pavement for bikers like myself, indicating the elevation and giving instructions when to eat and drink.  Ryan putters by me and waits every half mile to give me a towel as I am drenched in sweat 2500′ feet and climbing…

At 5000′ the road breaks out from the lowland trees and ranchlands and into the steep grasslands, two of the four unique climates that I will go through.  Here the switchbacks tighten and my first real battle against fatuige begins.  Altitude hits me and I’m sure I’m dehydrated even though I’m drinking as much as possible.  My speed slows and I have to take a break, surprised at the effect of the altitude. I’ve already eclipsed my max vertical for a single bike ride and the road is relentless, up up up.  Ryans’ cheerful exclamation “only seventeen miles to go!” are welcome but his voice seems farther and farther away.  The view are stunning and surreal, looking down on the beaches and towns, but there is work to be done seventeen miles to go and another 5000′ feet of climbing. The bike is too small and brain is starting to find reasons not to do anymore of this silliness, but I push upward until the switchbacks mellow just a bit, savoring every extended section of road that doesn’t have a hairpin turn in it.  A parade of rental cars passes me up and down, occasionally a fist pump out the window or a incredulous look. Allez allez allez. 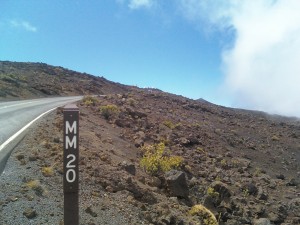 Passed the lower ranger station stopped on the grassy lawn and spawled out for a bit, staring into the sky and wordering how the hell I’m gonna get up the last 2500′ vertical.  I can’t seem to eat enough mini snickers or drink enough water.   Up above the clouds soar up and over the rim of the volcano. The summit crater looks tantelizingly close but still 12 miles  away. At 8000′ the clouds roil and churn.  The land is shifting into a beautiful but barren moonscape, lava and sparse plants, reminiscent of the terra high up on a fourteener.  I hunch down over bars, and deperatley try to find the mental zone where the pain fades, jabbering mind quiets and all that exists is the white line you are following and the sound of your own breathing. Final push, here we go.

I’m talking to dead relatives now.  There is no escape from the sheer exertion I have put out and my mind is rebelling and legs are screaming.  I cycle through happy thoughts to get just one more peddle.  Cheeseburgers, milkshakes, powder skiing all are temporary cures for the pain.  I crawl upward through the clouds whipping over the summit and down into the lee side of the volcano.  The tempeature has cooled and the breeze is welcome.  Trying to figure out how I can lash my bike to Ryan’s motorcycle for the rest of the way. At 9000′ up, the only option is to finish this ride so I don’t have to come back and do it again.  I hate my bike with a absurd ferocity at this point.  I feel like a bear at the circus riding the little bike around the ring.  Get me off this thing.

Hit the wall harder than I ever had in my life.  Staggered into the visitors center and collapsed on the first bench I could find, curled up in a fetal position and passed out for a half hour. Nothing left at all. I’ve never been so tired in my life, unable to sit up for twenty minutes.  Voices fade in and out, Ryans, tourists. Like any big mountain climb getting up is only half the battle, I have no clue how I’m gonna get down.  I feel like dog poo.  Sat up finally and realized that  the summit was another five hundred feet up another half mile.   I look at Ryan and shake my head.  He laughs and nods, knowing I have to finish the ride.  A nice lady from Breckenridge stops and lets me know she saw me on the way up. I remember her, she mouthed the words your crazy as she went by.  She gives me two bannanas and wishes me luck.  Force myself to stand up and wander around the visitors center and listen to the ranger talk. The crater is so big that manhattan could fit inside it, growing two inches a year away from the lava source.  It is amazing and barren, a place not to be lost in.

I recover amazingly fast.  The bannanas help and my body seems to adjust to the altitude pretty quickly. Compared to how bad I felt just a little while ago it is night and day.  I break no land speed records for the last half mile to the actual summit but I make it. The clouds break and we get great views of the Big Island’s 13000′ foot volcano.  Ryan and I  get the obligitory photos up top and turn around for the descent. All downhill now.  It is done.  Kind of like hitting mushroom rock in EV. Glad I did it, more glad I never have to do it again, but what a challenge.  I push off for the downhill and the miles clip past, somewhere in the middle of the descent I start laughing like Stewie from Family Guy and name my bike Silky for its superoirty on the downhill(I’m still a tad loopy)  Only one scary moment coming down.  I hit a hairpin too fast, laid on the breaks and  Tokyo drifted towards the  opposite gaurdrail. I stop, reassess and proceed with a little extra caution toward the beaches and towns where I belong.  I give myself a passing grade, maybe not an A but sometimes passing is enough…Aloha