Just want to report on our excursion to bighorn on Tuesday. Big J and I went up up the bighorn ridge to tree line on a perfect blue sky early spring day.

We passed all the skin tracks and went to the top of the ridge and were rewarded with an awesome view of the gore and found ourselves on top of a large avie path. 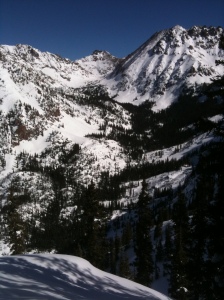 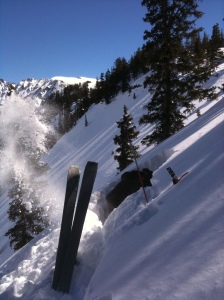 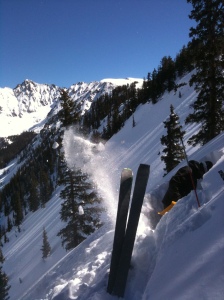 Examining the pack we found no obvious lenses or crusts, with the density going from fist density to four finger all the way down, changing from 2mm stellars to 2mm rounds at 155 cm. On our compression test we found ctm 22 with a Q1 shear at 155 cm. The new fluff was reactive on the old storm snow, making sluff a concern.

Continuing our pit we found a CT25 with a Q2 shear at 100cm. Uneven shearing and little pop made us wonder if our column was at fault, so we tested it again and found similar results. Moderate stability and a right side up snow pack gave us confidence to keep exploring. 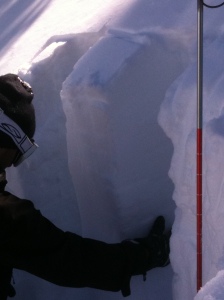 For the final test, we did an AK block, a reuchblock with out the back cut. This is a test created an promoted by Bill Glude an renowned avalanche forecaster, heliguide and avalanche guru from Juneau AK. After testing the block, and getting a RB 7, basically a no failure result, we decided to drop in.

The skiing was phenomenal up top. John and I leapfrogged each other staying closed to the treed edge, skiing to the choke. A traverse around the choke led us to some route finding and we ended skiing out farther skiers right, up the valley. 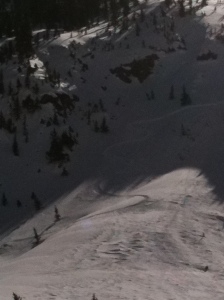 The terrain we were able to see and scout was alpine, rocky and steep, with the possibilities endless for exploration. Check out the photos. The Gore is the real deal, steep exposed and isolated. It deserves respect and caution. A great day all around.