It’s Christmas madness here in the valley. As I sit writing this, a visiting family is playing in the snow drifts below my second story window. Two kids are grabbing chunks of large icicles that have fallen from my roof and rollIng around the snow. Another kid, along with the Dad, are chucking snowballs at the remaining six foot skewers as the two others play underneath. They are oblivious to the Darwin award they are about to win. Ah yes, Christmas. There’s a metaphor here somewhere for EV travelers.

Had a chance to get out to to Tfalls on Saturday and dig a pit on a 35 degree NE facing slope by the entrance to the chute. Found very shallow conditions 80 cms, defined by two major layers. Settling denser storm snow on top of the typical Colorado basal facet layer, with two buried surface hoar layers in between. The loose facets underneath the recent storm snow have the stability of table salt. Two column tests were CT 15 and CT 17 with a Q2 shear on both. Hard to really qualify the shear as it was more of a crumble than anything else. Reports of lower pockets in trees pulling out in Racquette Club and Bighorn chutes as the basal facets give way under the weight of riders, especially lower down where the snowpack gets extremely shallow. Definitely calming down avalanche wise later in the week as the couple feet has time to settle. The snowpack isn’t nearly as reactive as earlier in the week, but lurking wind slabs and shallow spots by rocks and trees still provide areas of concern for trigger points especially N through E aspects.
Also noticed surface hoar formation, two to three millimeter as Saturday was humid calm and warmer. Sunday was colder and a few inches of new covered the surface hoar. Something to watch with more snow in the forecast.
The big news of course is the EV avalanche video that has gone viral and made it to CNN. Lucky for them the snowpack was shallow, later in the season it would of been a full burial. Interesting enough, Adam and I skied left Abe’s first thing that morning in the middle of the storm cycle, skiers right of the slidepath and had minor movement in the main choke.
Really nothing out of the ordinary for EV as far as the snowpack and early season avi cycles, the change is that technology is now allowing everyone to witness the game that is played out there, good or bad.
Sunday afternoon was a nice break from the busy opening week of EV. Bluebird, sparkling snow and noone out in the zone. A chance to take a breath, enjoy a solo lap in the forgotten trees and get ready for the reset and the interesting stories it will bring. Say tuned. 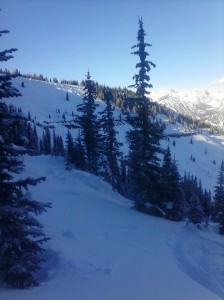 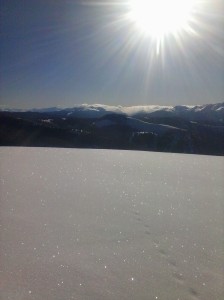 5 responses to “Merry Christmas from EVI”