It’s been a New York state of mind weekend, if you know what I mean.  Took the lead from Deuce and started my lap today with a stop at the beacon park to work on multiple burials.  That little SP button is a world of its own and finally after a few practice sessions, I feel solid about using it, although a mark function would be useful.

The procession down the groomed section of Poppyfields to 21 from Two Elk was endless. Our fearless guests ski like they drive, work and live in their home towns, all together, right next to each other, up in each other’s business.  I made it through the human slalom, up and out and head back for a Mushroom Bowl revisit.

Wanted to dig a pit in Mushie, albeit far away from the Kitchen, to see what was going on. The tally is now four burials past the gate at the Poma this week as told by the new signs up at the hike.  A viable option for EV access might be to install a beacon triggered access gate like ones used around in other resorts in the West, just a thought.

The recent avalanche statistics are sobering, not only for East Vail and Mushie, but for the rest of the state as well. as fatalities and incidents are spiking as new storms roll through, dumping new snow on top of facet world.  With another system rolling up on us, the avalanche activity doesn’t seem to be coming to and end anytime soon.  Interesting week ahead.

Headed even further up the line than yesterday, as I was solo and not willing to even come close to a unskied tree chute over 30 degrees.  Greybird and snow starting to fall, I found a cool low angle stumpline to bound around on. Sunk the tips on the last pillow before the small shelf and a did a spectacular ground flip, stopping on my tails. Looked over to my right and saw my huckleberry, a small unskied patch of snow, surrounded by trees. 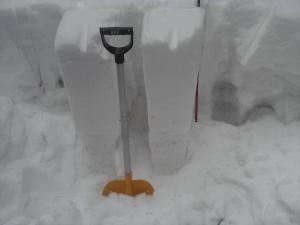 Here’s what I saw.

No real suprise, but confirmation that with added steepness, snow load and the pressure of a 180 pound person impacting this snow pack off a twenty foot cliff (one incident in the Kitchen area went down this way), there is no way the snow could support it.

The real question is why, after one or two incidents  in the same area, people still continue to ski in the same exact spot.  A question for forensic psychologists, not EVI.

Last day in Mushroom, back out to EV tommorow to check it out.