Still in the midst of the waiting game, Wednesday November, 30th was the perfect opportunity to dust the cob webs off the ‘ol Avi gear and put the “Avalanche Thinking Hat” back on to go poke around in the Vail Pass Backcountry.

The week was full of sunshine and moderate temps that kept the somewhat minimal “snow pack” at a danger scale of Low or Level-1 on NW-S aspects below treeline up to the peaks.  Aspects near and above treeline facing N-SE were rated as Moderate, or Level 2.  Wednesday afternoon was a true bluebird day, mid thirties on the mercury,   34% humidity and 5-10 mph winds out of the west at 10,600 ft.  All signs pointed to Uneva as a first good “tour” of the season, with relatively safe conditions and a chance to hunt down some ski-able powder. 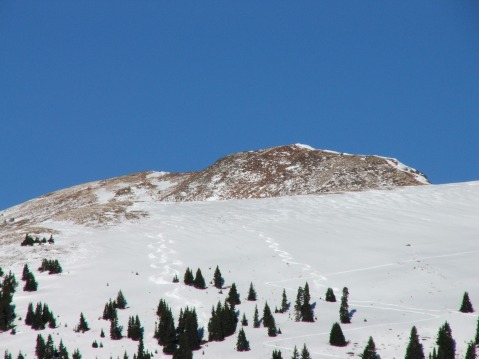 Starting out at the Vail Pass Winter Rec Area, sets of perfect powder turns were already visible up on the SW facing aspect of the drainage just South of the Uneva bowl.  A well established skin track already set on Corral Creek Trail made it very nice not to have to break trail, but here and there to keep in tune with “Avi-Thinking”, it’s really important to me to get out of the grooves and break some trail of my own, to gather info and tune into the signals and Red-Flag warnings the ascending trek and snow pack can scream or whisper at me…  i.e; whoomphing, collapsing, cracking and sinking up to the top boot buckles.  Not to mention poking into the snow pack to gather data on depth and what kinds of hazards are lurking under the deceiving white surface of snow.  There are still some buried roots/downed logs, “Shark Fins” (buried rocks) just waiting for an unsuspecting rider to viciously end their season early… Right now the data is a mixed bag of sun drenched areas with zero snow up to two and a half foot deep drifts and everything in between, so be very careful on the way down!

Each step of the trek through the old fire-scarred area just South of Uneva up into the 30 degree sloped gully produced incredible views that improved with each lunge upward.  Soon, treeline was well below and Panoramic views of the Ten-Mile and Sawatch Ranges started to peak out in all directions.  The ridge-top was so scoured by 20-30 mph wind gusts that boot packing was the only remaining option of ascent.  As I traversed north to the ridge-line that lay south of Uneva Peak, it was obvious that the prevailing west winds have been working hard to load the easterly aspects with as much faceted snow as possible.  This wind loading is burying the “White Dragons” of the past record-breaking 2010-2011 winter season and hiding potentially very deadly scenarios for our upcoming season.  Just stick that under your Avy-Savy-Hats and save it for later on this winter… 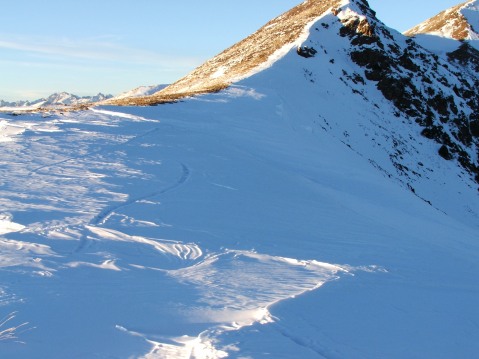 There was the first “Red-Flag” of the Tour!  The Next was a 40-60 meter long crack that had shot up-slope from where a bunch of dog tracks danced in circles out on the wind loaded cornice.  The crack measured a fist and a half to two fists wide creating a semi-truck wide cornice that would have no doubt given that pooch a First-Class ride to a summit county demise on the east side of the ridge.  The third and final “Red-Flag’ of the day was my misstep from the scoured solid earth of the ridge into a thigh deep hole just short of the previously mentioned cornice. What a way to emphasize the oldest Avi-Traveling rule in the book… never walk out onto a cornice!  That sixty pound dog was lucky, just another 100 lbs. and a few more of those deep steps out onto no-no-land and you’ve got the human factor that so famously causes deadly avalanches. 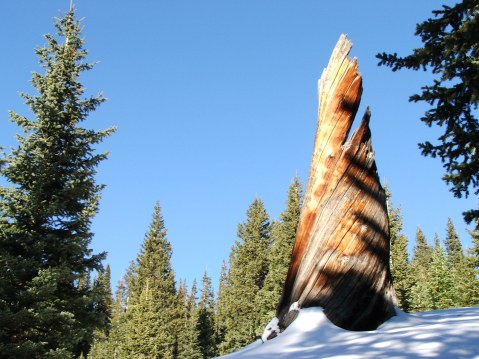 With all the data and info fresh in my head, “Red-Flags” resonating their priceless messages and the final ascent to the 12,522ft peak that is Uneva, I took the time to sit down and reflect on my journey to the summit.  All of the little details and warnings add up to one of the most important decisions of the tour;  how and where to descend.  I opted for the SW facing shoulder of Uneva north of the Cirque, stuck to the 30 degree and fewer pitches and stayed clear of the rock features that create the chutes.  Half traversing, half dropping into steeper zones, navigating the terrain was a mix of sun baked crust, facet filled depressions and full-on powder near and below treeline.  Sticking to the shaded sides of the trees and the uphill side of the drainage that flows out of the Uneva Basin, I quickly descended to the natural downhill ramp that leads back to corral creak trail, the car, safety, a hot meal, and not to mention cold beers with good friends.

Not a bad first tour of the season!  Being able to take advantage of the chance to dust off the Avi-thinking dust and cobwebs, the opportunity to snap shots of the surrounding mountains and scenery are what makes living and riding in the Vail Valley backcountry so rewarding and enjoyable!