I gathered with my group at the Yeoman Park trailhead around 8:30 on Monday, March 7th for our hut trip to Carl’s Cabin. It is a beautiful wood hut six miles up in a great area below New York Mountain, near the Polar Star Inn. It may not offer the sweeping big mountain views of some of the other 10th Mtn Huts but it has this warm , tucked in Whitman and Thoreau transcedental glow to the snow loaded heathy pine and spruce forest that just whispers wilderness wonder.

The group casually gathered packs, food, and beer under a bright blue Colorado sky with chuckles and high fives of anticipation. We threw all the big packs, food, beer, and whiskey in the sleds and enjoyed a nice sunny skin up. It was just a short couple miles before the sleds returned from dropping the bounty and half the group right at the hut. With a quick tow we were all styling on that first sip of beer well before noon. I often have mixed feelings on snowmobiles (mainly cause I don’t have one) but it is a great feeling to ski some fresh up hill at over 30mph and Apres is so much better supplied by the 2 stroke.

The weather clouded over as we headed out for the afternoon tour. (Another advantage of the sleds – a fresh feeling afternoon tour.) We climbed through some big old growth up to the ridge above treeline. We could see the storms building to the west as we searched around the cornices to recon for any big routes for Tuesday.

Nothing looked too clear or appetizing enough even after traversing up and around more southwest, especially as new snow clouded visibility. Saw more big rock and overhanging cornice, but it did offer some cool views above the town of Fulford. A whole winter locked up in a cabin there I could become a mad backcountry skier or maybe just a crazy mad man. As evening approached we picked our way through the scree collecting the occasional scratch and core shot through the fresh few inches from Sunday night. As we hit treeline we began to sample some good north facing softness and tree shots as we skied back to the cabin. The snow picked up and dumped super hard for the last hour of the day, before parting for a nice show by Orion and the bottom crescent moon. 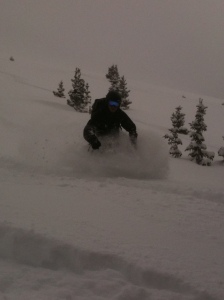 After a great dinner and all night apres we woke casually late to more snow and multiple imititations of my sleep apnea. (Which did upgrade me to an upstairs private suite for night 2). After coffee, pancakes, and fine bacon our group was off and breaking fresh trail up through the woods and above treeline. The snow was falling straight down with little wind in that serenity now pattern. The skiing was fabulous as we saw no ther groups that day as we skied lap after lap of big open north facing trees with a foot of deep fluffy face shot snow that you can taste the sweetnes of when you lick your lips. Took a late 4:20 lunch of Newcastles, salami,  and Buffalo Pastrami sandwiches before setting out for a twilight rally of goodness. The last lap was in the early edge of darkness where your throwing white powder at the dark shadows, hitting the hole and just touching the deep soul of what moves you in these mountains. I can’t say enough how nice it is to get away from work and the resort grind to be in a great place with good friiends, good snow and good vibes.

We ended the day with our fourth pork product and the last of all the bourbon and scotch. The morning was filled with hasty cleaning and a final fast lap for one more fix of that fluff. Another great run down through more of an open zone, ending at a couple empty yurts. We gathered the last of our stuff, shouldered our heavy packs (as the haul sled had already left) and had a nice sunny 6+ mile ski down. What a great trip. There is something about a hut with snow rising up the windows, wood stove cranking, and all your buddies laughing in delight. Go out and get some!