Took a drive tour over Loveland Pass  coming back home from the front range yesterday.  Stopped to hike the dog up  the eastside ridge at the summit of Loveland pass.  Stomping through freshness layered in among the scree it was great to get smacked in the head with 0 degree, 30 mph winds under  a cobalt grey sky.Stood into the wind  and took  a breath of the cold. The jet stream was whipping clouds overhead, obscuring the tops of the highest peaks off the Divide,  blasting eastward. Snow was falling and the wind was transporting it  in great swirls on the open faces of the pass, steadily erasing whats left poking through the snow. Off in the distance, A-Basin looked better than it did all of last year, lifts churning on a busy Saturday,  snow in the tress .There were even a few intrepid souls braving seriously early season conditions on the West side of the pass, skiing down to the lower switchbacks . Looked to be about 8 inches of fresh on top of  a  60 mile deep granite base. Admire the love, a little early for myself. Drove over a mitten in A-Basin”s cross walk. coming down the pass.  No hand in it.  Ahh winter. It’s back.. At least above 11,000 feet.

Back in our world, EV is covered in its first layer of the white stuff. I drove back over Vail pass looking   the notorious layer that is the foundation for  our snowpack. Usually for us in Colorado this  becomes a  loosely faceted  layer that sets the stage for an avalanche cycle in mid to late November in EV and can dog us for the entire season,  depending. Last season Old Man’s early season was perfect example, sliding to the ground in November.

This first snow set the stage for the crown jewel of a  garbage Continental snowpack in 2011/2012. Early October snow with a long  long period of  clear, warm weather created  2-4 mm very loose facets out of the first snow. Surface hoar also reared its’ ugly head. When we finally did get some snow, it came with wind and the results….well you remember. The snow pack never recovered.

Our best hope is continued snow without a third Indian summer before the larger snow load arrives.  As bad as last year was ,two years ago was the textbook for a decent  snowpack. fo us. Snow, snow and more snow, consistent temps and little wind. “Average” year ? I’d take it.

Every year is different and fascinating in our world, , not only because of the endless variables that affect our  snow, but the endlessly variable human element as well.  You can’t make the stuff up that happens out in EV. Keeps me coming back and I can’t wait to tell the tale this year. See you soon at the bus stop. EVI.

The EV season may be over, but all of us pow addicts know that the second season is in full swing and has potential to be one of the great spring seasons in recent history. DPS Dave, Brent the Lawyer, and yours truly took a trip over to A-Basin the Tuesday after Vail’s closing on a blustery three inch day and mulled over the endless options of terrain. Although the wind was up in the alpine, we after some discussion, decided that Shit For Brains, the promenent west facing couloir in the arena east of the A-bay was in play. No naturals observed in the area and moderate amount of new snow gave us the window we were looking for.

Dave and Brent had never skied it and I was looking for redemption after a starfish incident last year, too horrible to describe here (I’ll blame the wind jacked snow). We decided to climb the route instead of taking the ridge, allowing us to assess the snow on the way up, staying true to the mantra climb what you ski, especially in big terrian you are unfamiliar with.

The skin from the CDOT barn was smooth sailing, steep but relatively short. We actually were able to skin into the mouth of the chute and proceeded to strap em on the back for the rest of the way, staging under a large rock fin on the right side of the chute. 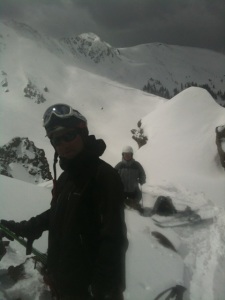 Shit For Brains is a great funnel for prevailing westerly winds, and with the wind transport of new snow it was literaly snowing uphill around forty miles an hour for the entire couple hour hike, managing to get snow underneath every layer of my clothing.

Conditions were amazingly varied from pockets of windscour to two feet of soft wind whipped snow. We definitley had our work cut out for us as we were kicking steps into the fresh and having to use poles as cross braces to pull ourselves up, exhausting and arduous work.Watching Dave kick steps, scramble up a couple feet only to slide back down was painfully comical, and the formula for ascent was ten steps, rest, ten step rest, whimper. 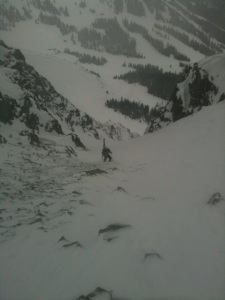 The chute is pretty damn steep, and in low snow years can be rocky and only a couple ski width wide with in certain sections. With the abundant snow this year, the chokes were filled nicely, but the deep wind load made the snow catchy and thick.

After forever we got to the mouth of the dammed thing and considered our future. There would be no sending, but controlled steep skiing as the conditions changed from turn to turn, having sluff build and letting it run through, watching for movement, rocks and other hazards. We leaped frogged each other for the first 500 vertical feet or so and then after no avi problems one by one skied the rest of it. I was the last one down, and the momnets I had alone in the coulior were the reason I came back. 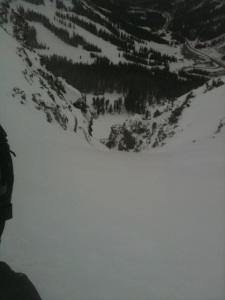 Wind howling, stuffed between jagged vertical rock walls and the amazing vertical, craggy terrain of the surrounding area made it asthetically one of the most appealing descents of the year. I love the high alpine feel of the area and this particular chute provides it spades. My descent was deliberate and fun, roiling sluff and rolling over, it was a true test of endurance and variable condition skiing. Legs burning, I met up with the crew in the flats by the trees. We all stayed for a moment to look up the run, then were off to the chilling beer at Brent’s car at the A-bay parking lot.